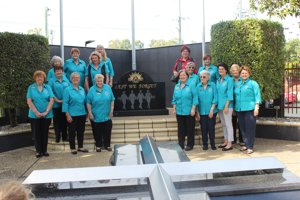 The Greenbank RSL Women's Auxiliary was initially established in 1988. The aim of the Auxiliary is to fully support the Greenbank RSL Sub-Branch in its endeavours to continue to contribute to the Veterans, ex-Service members and the general community in every way possible, in keeping with charter of the Returned and Services League of Australia.

The Women's Auxiliary meet on the second Tuesday of each month from 9am. New members are always welcome.

Welcome to the Naval Association of Australia, Greenbank Sub-Section.

Our aim is to provide camaraderie, welfare and pension assistance to uphold the traditions of the RAN.

All ex-Maritime members are welcome, both Service and Civilian.

Our meetings are held on the first Tuesday of each month at 1900hrs in the Sub-Branch Rooms. New members are welcome.

The RAAFA meetings are held on the first Monday of each month at 6.30pm in the Sub-Branch Rooms and hold three BBQ meetings per year.

If you are interested in joining the RAAFA Logan City Branch or would like more information, please contact either President, Eric Cavanagh OAM on 0438 460 031 or the Sub-Branch on 07 3380-0270.

The modern Men's Shed is an updated version of the shed in the backyard that has long been a part of Australian culture.

The Greenbank RSL Sub-Branch Men's Shed was officially opened on the 19th September 2012 by former Logan City Councillor for Division 7, Mr Laurie Smith. It is located at 3/15 Corporate Place, Hillcrest adjacent to the Services Club.

So, what is special about Men's Shed? Most men have learned from our culture that they don't talk about feelings and emotions. There has been little encouragement for men to take an interest in their own health and well-being. Unlike women, most men are reluctant to talk about their emotions and that means that they usually don't ask for help.

The Greenbank RSL Sub-Branch Men's Shed was established in an attempt to address and deal with these and other issues related to men's health and welfare. The overwhelming response that we have received to date has proven the need for and the benefit to our community of the initiative.

Providing unrivalled access to policy-makers, a raft of commercial benefits, world-class research and top-notch publications, National Seniors is everything the older Australians need to navigate the second half of their lives.

While the organisation stays true to its roots by giving older Australians – working and retired - a strong national voice, it also leads a new guard of seniors: the baby boomers who are already redefining what it means to grow old.

6.9 million Australians are now aged 50 years and over. They join National Seniors for a single voice and to be part of something bigger.

National Seniors meet at Greenbank Services Club the second Tuesday of the month in the Lounge at 10:30am